Stratford, Ontario – An energized crowd of Local Liberals gathered in Stratford at the Royal Canadian Legion for a
Team Trudeau 2019 Nomination Meeting on August 12 where they confirmed Pirie Mitchell as the Liberal candidate
for the riding of Perth-Wellington.
Guest speakers were: John Green, former Mayor of Mapleton; Jamie Hahn, former Mayor St. Marys and Kate
Young, MP London West.

Former Mayor of Mapleton, John Green:
“Here folks we have a man who offers himself as a candidate to represent us in Ottawa as he continues his desire to
serve his fellow man. This man is tireless, firm in his convictions and importantly, he doesn’t owe anybody anything.
My friends think positive, think honestly, and think Liberal for Perth-Wellington!”

From former Mayor of St.Marys, Jamie Hahn:
“When you find a person who is the right person for the job, and has a track record of building your community, you
look past partisan lines and you vote for the person. A vote for Pirie is a vote for our community. Perth Wellington
needs Pirie Mitchell in Ottawa and that is why I am pleased to be invited tonight to endorse him.”

Liberal Candidate Pirie Mitchell believes “Now it is up to all of us to make opportunities available to the next
generations, whether they be our own descendants or descendants of new Canadians from faraway places. Let us
continue to be a beacon to the world where we are admired and respected because we have Liberal values which
benefit everyone. Come on my friends, let’s join the Liberal winning team. We can win this!! We can win this!!!!”

Following a career as an elementary and secondary special education teacher, Pirie went on to lead churches in St.
Marys, Stratford, and Palmerston as a minister with the United Church of Canada. Pirie and his wife, Ruth, are
proud parents and grandparents, with five children and three grandchildren between them. He is committed to
working with Justin Trudeau and the Liberal Team to protect our environment, lower the cost of living for families and
offer real help for everyone, right here in Perth-Wellington.

Pirie Mitchell has deep roots in the community and a passionate commitment to building a better future for families
throughout the region: “This election is a call to action! I cannot win this riding on my own. Winning depends on two
things: the right policies and the collective work of many. Winning is a team effort. I am committed to winning this
race and giving us a representative in Ottawa who cares about people and Liberal values. “ 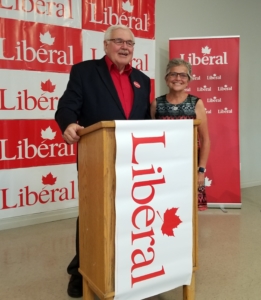 Candidate Pirie Mitchell and his wife Ruth share an exciting moment at the Perth-Wellington Nomination meeting.